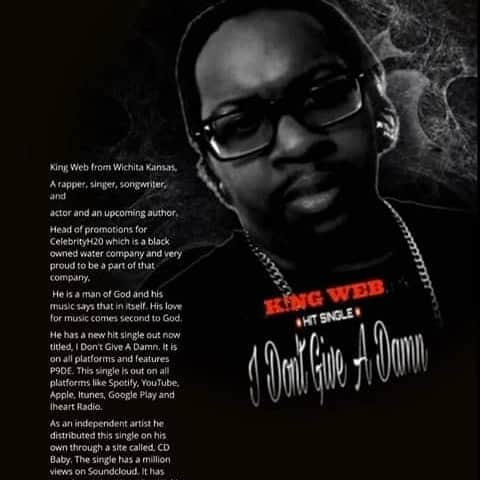 King Web, originally from Wichita Kansas, started out singing at an early age in the Church
choir at St. Matthew C.M.E. He was heavily influenced by his cousins Pastor Michael
Portley Jr and The Students of David, and his neighbor Mr. Berry (who was an R &B
singer.) They gave him his passion to sing, write, and perform. King could be found in
the home of Mr. Berry, performing in his studio.

Moving to Arizona, his eyes opened to other endeavors in the Hip Hop World. Forming a
group, they began shopping there music around. Notoriety and skills landed them in
talks with Sony, and Def Jam. King feeling that he was not focused enough, turned it
down. He chose to raise his daughters and son and pursue other dreams.
But always in the back of his mind, music is always there. He released a single called

“Don’t get Caught in my Web,” that received 90,000 downloads and also his single "I Don't Give A Damn" has over 104K streams. His music was also featured by DJ King Assassin, 2 Pac’s former producer on 98.2 The Beat in LA. DJ
Nightcrawler of NightShot Radio