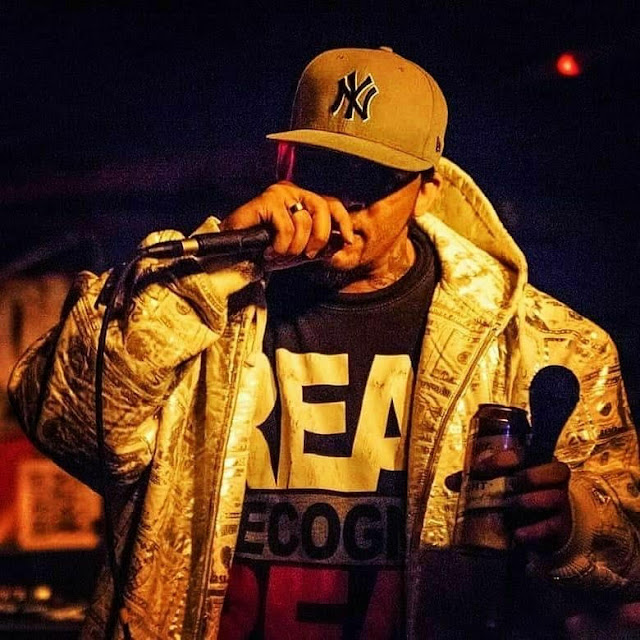 There is an entire world of underground artists of all genres ranging from all ages, and coming from a variety of societies, backgrounds and cultures. However, there is one thing all underground artists have in common, and that is the true love of music. Not only are they very passionate about their music, but their lyrics come from the heart. If you listen closely, you will often find yourself listening to a true~life story or event that has affected the artist. Before you know it, they are sharing that real life moment with you through their music.
William “BISHIP” Graves, born December 12, in Harrisonburg, VA, is an underground artist with much love and respect for music and this game. His drive and love of the craft is what separates him from other artists, and his goals and visions are like no other. Even if BISHIP wanted no part of music, there was no escaping it! From a young age music was embedded into BISHIP through his family. Which only makes sense as to why he is so passionate about music, and where his passion stems from. It was at the age of 11 when BISHIP knew he was going to be an artist, and even more so, have a huge part of the music industry.
BISHIP has had the opportunity to collab with underground artists from all over the world and released many mixtapes. In September of 2012, BISHIP became a part of a group named "THE CRASH UNIT” and during their time together they released the mixtape “LOST.” Not to mention, BISHIP was involved with several radio blogs, but in November of 2012, became a huge part of a worldwide radio show called "LEKSIII Productions.” BISHIP not only helped this show to evolve, but he brought it to new heights. He spent several hours and days promoting, bringing new artists to the show and introducing them to this movement. In 2010, BISHIP established his own record label, MOB OUT ENT., and from there he became an A & R scouting for new talented artists. Not only did he study each artist, but he hand-picked them carefully to ensure that they were the right fit for the MOB OUT ENT FAMILIA. When it comes to BISHIP, he is very direct and transparent and has a no time for artists that aren’t willing to put in the work. In other words, the same energy he puts out, is the same energy he expects in return and won’t allow anyone or anything to bring down his MOB OUT FAMILY. Since then, BISHIP remains diligent and has released two mixtapes, “United Powers” and “The Rebirth”, not to mention numerous features on projects. In 2016 BISHIP was asked to be part of Chinaman Records by the late Pioneer and Legend Fresh Kid Ice of 2live Crew. In 2017 the project Breaking Glass Ceilings was released https://open.spotify.com/album/5WSoVikD6GJ4wXee8ThGfx?si=k0fJ0eqRSU... Shortly after the release, Rolling Stone Magazine published an article https://www.rollingstone.com/music/music-news/2-live-crew-co-founde... and the final project from his vision of Chinaman Records was featured in the Article.
BARZ FOR THE FANS
BISHIP has captured the hearts of many by the way he articulates his words of wisdom that flow through his music. This is just one of the many reasons why his fans have gravitated to his artistry and original sound. Over the years, BISHIP has come a long way, but that is only because he believed in himself when no one else did and strives for the best and to be the best version of himself. He refuses to give up on what brings him to a place of solitude. BISHIP is a true testament of a “GO GETTA” and does not allow his mental focus to be sidetracked. Once the vision has entered his mind, he plants both feet on the ground and gets it done! He is a force to be reckoned with.
BISHIP seeks every opportunity and steps necessary elevate to the next level by constantly thinking and looking outside the box. He is now an official shoe designer for “NEW VIBEZ ~ GO GETTAZ ~ https://new-vibez.italianfashion.design and the “FLEX SERIES” ~ https://www.aliveshoes.com/flex-series and many more are in the making. STAY TUNED!
Finally, BISHIP’s passion for music is his life and will not go down without a fight. As you will see when you visit www.moboutentertainment.com., has unique and phenomenal talent on the roster and there is something for just about anyone that loves music. From BISHIP, DJ CHEMO, DJ SEAN SWIFT, MIKE G, NTG, YUNG DRAW, KUUMBA AND KALYSSA. If you are in AUSTIN, TEXAS from March 17th ~ 20th, you will be able to see some of MOB OUT ENT’s. artist’s blessing one of many stages at SXSE2022.
Follow Biship & The Mob Out Crew Below !!
@MOB_OUT_ENT  @biship974
https://moboutentertainment.com
Follow The Label
Click Here