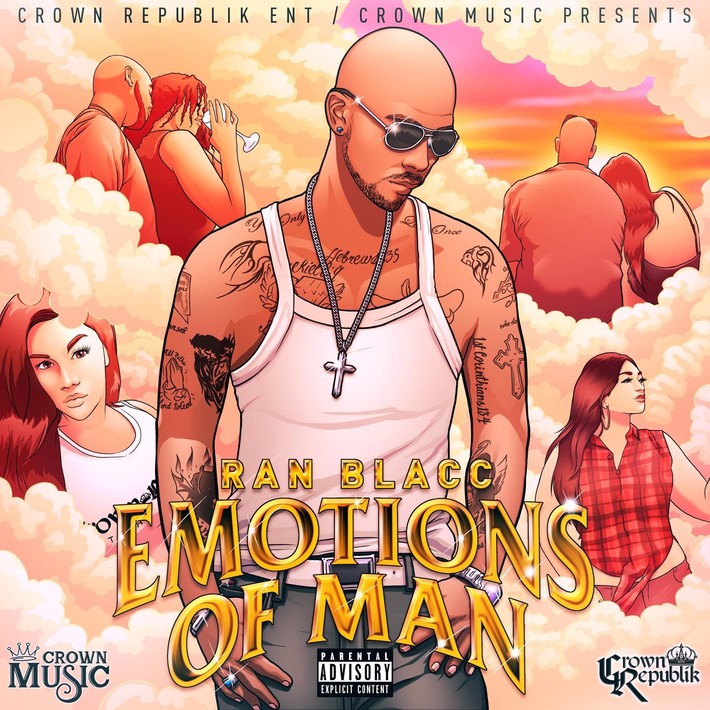 The long awaited Solo Project “Emotions of Man” by Ran Blacc of Crown Music, is now Officially available on all Streaming Platforms!

Ran Blacc steps out of his comfort zone, and gives us that heart felt Hip Hop & B, mixed with Rap, Spoken Word, and takes us on a journey. He gives us an inside look at the inner workings of his mind as he shares some very personal, yet familiar experiences that many of us can relate to.

Starting in November of 2020, Ran Blacc has been releasing a Single Track a month off of this album, starting with “Screen Friend” ft Carolyn Rawles. He then released “Decisions” ft XI da' MC, and “Last Night”.

The release of “Cuddle Up” ft XI da' MC, and LooseLyric in February made it the Perfect Valentine’s Day track with it's old school vibes. That was then followed by the release of “Take It Back”, “I’m OK”, “You Dipped on me “Goodbye”" and “Sumthin I Neva Had”; which is actually a subliminal song dedicated to Marijuana.

Ran Blacc decided it was time to release something that the world has never heard before, and ended it with a very special Bonus Track called “Brighter Daze” ft Randall Black Sr., a remake to his Dad’s original track called “Brighter Days”, which was originally a Gospel song. Ran Blacc is honored and privileged to have worked and shared that with his Father.

Be sure to hit up "Emotions Of Man" by Ran Blacc on all Streaming Platforms!