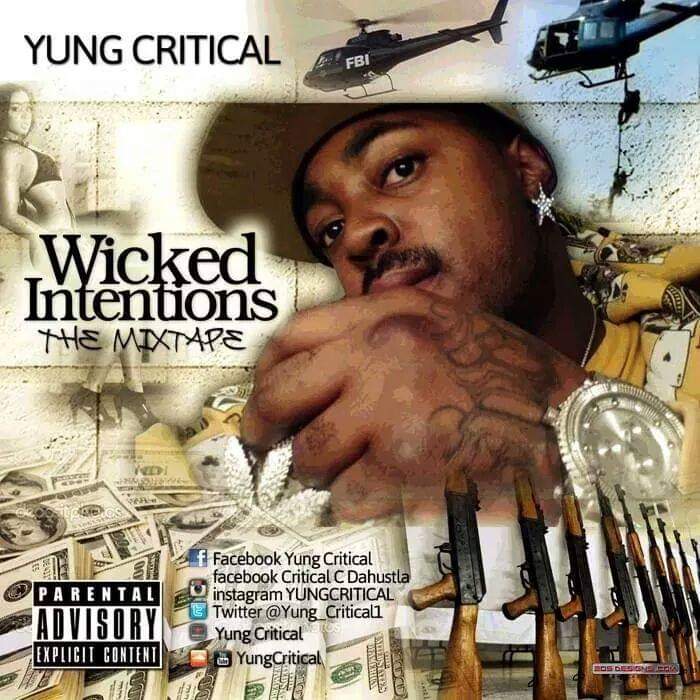 LAS VEGAS, NV – Yung Critical is a Las Vegas hip-hop and gangsta rapper who has been slowly building a reputation over the years as one of the most solid, flying-under-the-radar musicians in the country. With the release of his newest singles “Stock Market” (feat. Hitman Beatz) and “Wicked Intentions” however, that under-the-radar reputation is about to get blown out of the water.

Born in 1988 in Las Vegas, life didn’t always hand Yung Critical a smooth road. He started rapping at age 12 when at a young age he discovered a natural affinity for spitting lyrics that made people sit up and pay attention. But later in his teenage years, he was arrested and subsequently tried as an adult for a crime that would eventually land him in prison. When he got out of prison, he put his efforts into a legitimate career that could help him fund his aspirations of becoming a globally recognized artist.

“I’ve been through a lot to get to where I’m at,” he said. “I’ve been doubted and I’ve gone through periods when no one wanted to do a song with me or no one would invest in me. I was told at one point that I’d never get more than three songs done, but now I have more than 50 songs under my name and copywritten under our label (UnderGroundBumping Records, which he runs with fellow Vegas artists SwiF Crook and K Slick and others). I can actually invest in my own career now and take it where I want to take it. We even have an independent film coming out soon that tells the story of where we’ve all come from and how we got to where we are today.”

His new single, “Stock Market”, also serves as a kind of testament to his success thus-far. Though he has become somewhat known for his gangsta rap, this song features more of a hip-hop beat with motivational lyrics that inspire listeners to stay on the grind and stay focused on pursuing their dreams.

“Don’t let those distractions stack up,” Yung Critical said. “That’s what this song is about. A lot of people reached out to me and told me more complements about this song than any other I’ve ever made. So I’m hoping to use it to get my name known and to get that positive message out there. It also shows people that my voice and my delivery are different. I’ve heard that from a lot of different people. I can’t think of anyone who sounds like me. And when you combine that with music that’s motivational within the hip-hop genre, you have a one-of-a-kind artist. Mostly, I want to be known for motivating people. You’re always gonna have outside negative influences that try to discourage you to get off-track, but my music is here to help you stay focused. I’m here to reach out and touch those who come from a troubled past and let them know there’s a way out and a different way they can take.”

To listen to Yung Critical’s music or to follow him on social media, please visit: