2. Even though the symbolic nature of the HOODX Lit gives many jewels that can explain circumstances that normally cannot be explained, there are still extreme levels of CCDD that cannot be explained whatsoever. These types of situations are examined very closely under the HOODX Lit, with the underlying notion that "Smith is ruthless". We accept the harsh reality of this circumstance and study it with a scientific mind instead of giving into the astonishment of the random CCDD. 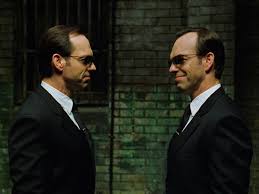 3. The purpose of science is to give reasonable definition to objects or concepts that have no name or cannot be seen. The word "chaos" was not entered into scientific research until 1976, when science admitted that there a certain circumstances that will remain unknown or indescribable. The notion of chaos goes against the purpose of science, which is to define that which cannot be seen or easily described. Instead of giving into the astonishment of the unknown, we understand the ruthless nature of the matrix programming and are not easily frightened when confronted with harsh reality.

4. The Program Still Running Lit explains that even though you did everything possible to avoid a chaotic situation, it doesn't mean that chaos still won't try to takeover. The HOODX Lit is not a "get out of jail free card". The HOODX Lit does offer "insurance" and risk management to hedge unpredictable circumstances that appear to "just so happen." However, one must always remember that as they get wiser in knowledge, Agent Smith upgrades in tactics of CCDD. As you get better, the program upgrades. This is known as Smith is Ruthless.

5. A "Smith Package" is an indescribable circumstance. CCDD seems to attack from different angles at the same time to the point that there is an undeniable synchronicity behind the madness. In fact, there is such a vast amount of CCDD that is so synchronized that it becomes almost impossible to even describe what happened first, second, or third. There is no beginning, middle, nor ending to this story. It is the opposite of Time without time. This is a gateway to the Isfet Avatar.

6. On the surface, this appears as a hopeless situation. However, once time is taken out the equation, it must be remembered that "all bad works for the good." The situation only appears ruthless on the surface. However, behind the curtain, the actions are setting the stage for a revolution. Typically after a Smith is Ruthless circumstance, many good scenarios begin to take place.