The Motherfuckers in Between Lit:

1. The subconscious thoughts that propel a person to produce a r equired action at that moment.

2. The thought that produced the action, combined with the congruence vs. non-congruence in between that thought and action.

3. Your spiritual self standing inside your somatic self whispering in your ear.

4. The angel and the devil on your shoulder, walking around with you, programming your analysis.

5. The only part of the body that falls victim to suggestion, programming, mind control, and being hypnotized.

6. The voice you hear when you pray that you realize is not really you per se, but what the situation produced you to say at the time and how that is separate from who you are at any other given moment. 7. The word "Self" contains the word "elf" in it.  The Motherfuckers in between can be thought of as elves and fairies, who live inside your mind.  Each one has their own set of thoughts, that might contradict someone else's thoughts.  However, they can all read each other's minds, as they try to work together to create a harmonious balance.

8.  The Keebler elves are seen as the actual thoughts of the conscious mind.  The tree represents the brain, or the tree of life, which guides us on our path to higher thoughts.

9.  In Teenage Mutant Ninja Turtles, there is a character named "Krang" who is a brain with eyes, ears, a mouth, nose, and tentacles, sitting inside of a robot.  The only difference is that Krang is placed inside the robot's belly instead of his head.  This is also symbolic of the conscious being led by his gut, passion, and lower self (third chakra), instead of "using his head." 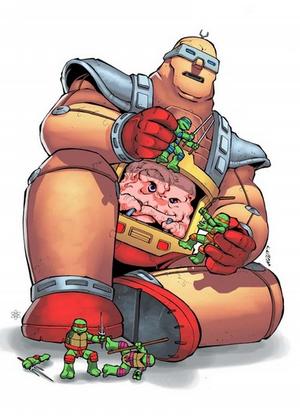